This two-part post examines the article Socialism and the fight against Transphobia, by Stephanie Hanlon and Adrienne Wallace, which leads the most recent edition of the Irish Marxist Review (IMR vol 8 no 23). Part 1 of this post looked at the authors’ treatment of gender identity. Part 2 now examines the issue of sexual and gender binaries.

Many gender ideologists go on about pink and blue brains, men inside women’s bodies and vice versa, and these concepts are widely employed in the corporate mass media’s propagandising. These formulations retain the concept of a binary between women and men. But the IMR authors, like many other left-leaning gender ideologists, dispute the whole idea of a binary:

Gender Critical Feminism (GFC) is an alternative term for Trans Exclusionary Radical Feminism, as there is no major ideological difference between them. Both argue that because sex is a “natural binary”, trans people are always the sex they were assigned at birth. Intersex people either do not exist or are “anomalies” produced as a result of birth defects…

And they say the very idea of a sexual binary is politically conservative:

Transgenderism blows the typical and repressive gender binary that has concreted the oppressive family structure, which capitalism has reified, right out of the water. It points to a whole human mosaic of sexuality, genders and relationships that do not conform to any norms. And while there is no definite answer with regards what defines our gender Identity one thing is for sure – it rests on an array of complex social, biological and psychological forces and has the potential to challenge one of the oldest oppressions of women and the working class- the nuclear family.

This passage makes ridiculous claims. Women’s liberationists and Marxists have long called for a world where everyone is free to adopt whatever sexuality and personal relationships they choose, within a humanistic, mutually respectful and loving framework. These ideas are not innovations granted to us by gender ideology. The only new arguments here are false ones: that the concept of a female-male sexual binary is a mere ideological construct, which somehow contributes to the capitalist family unit, and women’s oppression.

Overwhelming evidence for the sexual binary

It is true that some (not all!) scientists are now supporting this claim. The frailty of their case is well summarised in Do women exist? a measured, carefully argued piece by James Robb. “Distinct sexes,” he points out, “arose in natural history as a condition of sexual reproduction… There is no form of sexual reproduction known which involves more or less than two sexes. Sexual reproduction is universally binary”.

Scientists who support gender ideology highlight the existence of chromosomal abnormalities: we are not all simply XX and XY. But Robb notes the distinction between “the genetic ‘information’ influencing sex and the actual physical form of sex.”

“Chromosome arrangement,” he points out, “is one of the primary mechanisms determining sex in an individual, but not the only one. Hormones also play a major role, and these are not all governed by genes on the X or Y chromosomes.” And importantly, the “outcome of sex determination, the sex of a human being, is the form of the reproductive tract. There are only male and female forms.”

As for intersex people: “even among the small percentage of the population who have atypical chromosome arrangements and intersex conditions, ambiguity of the reproductive organs is rare… many people born with sex chromosomes other than the typical XX or XY pattern have some kind of developmental and/or reproductive disability, and often lifelong health problems,” making them “the exceptions that prove the rule of two sexes”. In any case, the intersex argument is simply thrown in when convenient; it is not as though transgender identity relies on such a condition, or that intersex people in general identify as trans.

The only reason why the sexual binary is now challenged is to justify trans identity. The fact that this has been taken up by some scientists does not reflect scientific method, or the knowledge accumulated through it. Rather, it reflects the fact that the ruling ideas are the ideas of the ruling class. That class is using gender ideology as a new way to hold down women. And as the capitalist system declines, its apologists veer further away from materialism toward idealist and irrationalist views of the world, and this impacts on science.

Traditionalism and the sexual binary

age-old “common sense” that does not need to be articulated or argued for, but can be left unsaid, since the audience is assumed to share these prejudices.

Gender ideologists try to blur the distinction between traditionalist sexism and gender-critical progressivism, to tar us with the same brush. Some traditionalist sexists do this too, trying to work with or even win over gender critical feminists; they are happy with formulations such as “woman is biological” since, by itself, it can be understood as “woman is biological and therefore naturally feminine”. This is a problem, since gender critical feminists, censored by the left, sometimes resort to conservative platforms to have their voice heard. Traditionalists don’t like any alternative to the hetero-normative, traditional nuclear family, whether from feminists, Marxists, gay rights activists or gender ideologists. Their vision of women and the family is linked to nationalism, union-bashing, and old fashioned sexism. Traditionalists are gathering strength in many parts of the world, blurring with racists and a resurgent far right. For these reasons it is essential to differentiate ourselves from the conservatives at every possible opportunity – to reassert that our fight is also the fight for abortion rights, against lesbophobia and homophobia, and against sexism in all its forms.

Neither gender ideology nor social conservativism, but women’s liberation 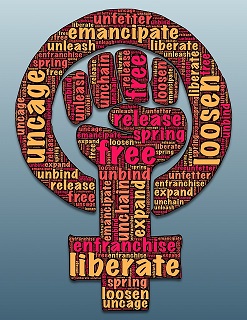 women from the neoliberal sexism of gender ideology. In the face of their hostility a great many feminists have turned to right wing platforms to have their concerns heard; some have cast aside many years of allegiance to the left.

When western working classes finally move back into large scale political strike activity, masses of working women will shake off both gender ideology and any new-found friends among anti-union conservatives. When that happens there will be an opportunity, and an urgent need, to win them to a revolutionary socialist workers party. But that same upturn of struggle will confront the SWP with its own monumental errors in supporting gender sexism, and that will generate a new internal crisis for it.

Like Loading...
By freerlives in Uncategorized on March 8, 2019.
← Gender ideology in the Irish Marxist Review (part 1) Gender ideology, the bosses and the right: a changing landscape →